Thhe two great influences on Vincenzo Gemito's art were the street life of Naples and the city's great ancient heritage, particularly the treasures within its Museo Archeologico Nazionale. Gemito's dramatic entry into the world began on the steps of a foundling hospital. From an early age he lived the life of the street urchins he was later to portray with so much vitality. Within the chaotic, bustling life of Naples in the late 19th century Gemito drew on his natural talents to rise out of the gutter and at the age of nine found work in the studio of the painter Emanuele Caggiano. With a precocious talent he seems to have been little influenced by his master, taking his inspiration directly from the raw life of the city around him and from his beloved antique prototypes. At the age of 16 Gemito showed work at the prestigious Promotrice di Napoli and it was purchased for the city. Although Gemito journeyed to Paris, exhibiting his Neapolitan Fisherboy at the Salon of 1878, it is hard to detect the influence of French masters. Equally his own influence was limited to Naples as his lifestyle was secluded and solitary. He remained a highly original artist throughout his career.

'I completed three medals of Alexander having been inspired by fourteen [antique] portraits which I had boldly got to see wanting to check the entirety of his divine image. When I saw Alexander and found that he resembled what I had created I realised that if an artist is ignorant of the past he can never produce a masterpiece.' 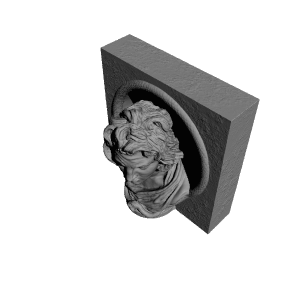