The Crouching Venus is a remarkable instance of John Nost the Elder’s assured carving, and is a rare surviving example of a classical subject by the artist in marble. The sculpture's scale and accomplishment give it a grandeur and presence which were truly exceptional at that date in Britain. Like the antique prototype, Venus is depicted ineffectually attempting to cover her nakedness, her gesture only succeeding in drawing attention to her sensual body. The goddess is thought to be bathing, or possibly adjusting her hair, and caught unawares. Nost’s sculpture suggests the sophisticated level of patronage of the wealthy gentry in Britain at the start of the eighteenth century, and tantalisingly evokes the way in which interiors of eighteenth-century country houses were adorned with sculpture.

The nude goddess half-kneels on an integral plain rectangular base, resting her left buttock on an overturned urn, her arms crossed in front of her breasts, her head turned to her right, and her hair partly coiled in a bun at the back of her head. She wears a bracelet on her upper left arm. The sculpture is signed on the front of the base: ‘I. Nost F. /1702’. The figure is set on a contemporary marble base, also designed by John Nost. 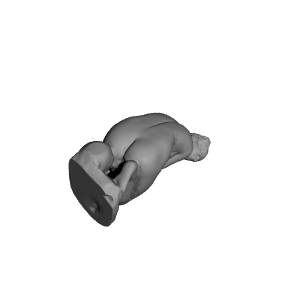