Avro Vulcan B2
Strategic bomber used by RAF from the 1956 to the 1984.
The Avro (Hawker Siddeley after 1963) Vulcan is a delta wing aircraft born from the British Air Force's request for an advanced bomber/nuclear deterrent that led to 3 projects of the V-bombers series ; the others were the Vickers Valiant and the Handley Page Victor.
Built in 136 exemplars (including prototypes) this aircraft served only with the RAF although it had been proposed to Australia but without results.
Argentina was also interested in this plane but after the Falklands war and the subsequent embargo the opportunity vanished.
The model is the B2 variant with increased wing surface, more powerful engines and better avionics especially ECM equipments.
Model 1:100 scale printed at 1:285 with 0.4mm nozzle and 0.12 mm layers.
Printed with a Ender3 as shown in the image taken from PrusaSlicer 2.0.
I opted for the version divided into two parts by length ; use sandpaper and in the end the glued joint is not so visible and once painted almost invisible. 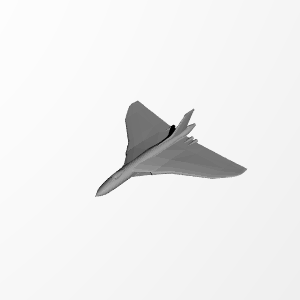 ×
0 collections where you can find Avro Vulcan B2 通过 erikgen63