This model was created by collaborator JRistol (Instagram @1.6_3dart),

The Basilica of Santa Maria del Mar (St. Mary of the Sea) is a gothic church in Barcelona's Old City built between 1329 and 1383, when Catalonia was at the peak of its maritime and mercantile dominance. It is an outstanding example of Catalan Gothic, with a purity and unity of style that is very unusual in large medieval buildings. It has been damaged throughout the centuries by fires and the Spanish Civil War, but it has prevailed.

Its construction is the background for the best-selling novel La catedral del mar (Cathedral of the Sea), by Ildefonso Falcones (2006) which was subsequently adapted into a Netflix series in 2018 (from Wikipedia).

MiniWorld 3D is excited to bring this charming model to life as a homage to all the people of Catalonia. This model was made by collaborator JRistol (Instagram @1.6_3dart), please give credit, it's all about spreading culture and education!

Easy print, no supports or rafts are needed.

Use best resolution to get all the details. 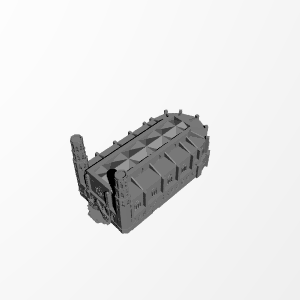