Complete specimen of the Silurian brachiopod Kirkidium knighti. This specimen was donated to Ludlow Museum in the mid to late 1800s.

The most common seashells at the beach today are bivalves: clams, oysters, scallops, and mussels. From the Cambrian to the Permian (542-252 million years ago), however, fossil seashells are dominated by another group of organisms with two hinged valves, Phylum Brachiopoda. Over 12,000 fossil species of brachiopods have been described, but only 330 species remain alive today. Bivalves and brachiopods are both sessile filter feeders, sitting on the seafloor and filtering water for food and oxygen. Their abundance reversed at the end of the Permian, when the greatest of all known mass extinctions eliminated more than 95% of Earth’s ocean species. The Permian extinction involved a crisis of low oxygen in the atmosphere that favored the more muscular and actively respiring mollusks over the passively respiring brachiopods. Clams and their relatives are much more efficient at extracting oxygen from seawater, so they were more successful after the extinction. 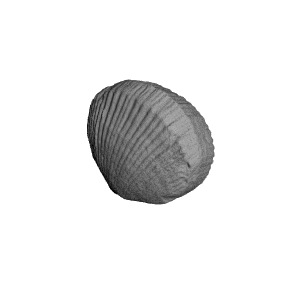