The ancient region of Gandhara, in present day Pakistan and Afghanistan, was a source of early images of the Buddha. Here, the meditating Buddha sits cross-legged, in the gesture of meditation, or dhyana mudra. The facial features and robes show the influence of classical sculpture. Alexander the Great conquered parts of Central Asia in the 4th Century BC, and established settlements there. The Greek influence in the region lasted for many centuries.

A large-scale image of the Buddha seated cross-legged in a yogic posture (padmasana), his hands resting in a meditation position. The Buddha is deep in meditation, a model yogi. He wears his monastic robe over both shoulders in a manner closely associated with the Gandharan school of Kushan Buddhist art, though it is also known as Mathura. The robes are treated with deep folds and pleats that animate the figure and are masterfully conceived. The robes covers all his body, revealing only his hands and one foot which projects from beneath the robe. The Buddha is seated on a cushioned throne support, with lion-claw legs and drawn drapery. Beneath the throne-seat is a scene in which the Buddha is shown, with uncut hair before his renunciation, attended by followers and others paying homage to him. This scene alludes to the earlier (and failed) paths that the Sakyamuni pursued before gaining an understanding of the true path and pursuing the Middle Way.

The Buddha’s head displays a fully developed skull protuberance (ushnisa), in which the top-knot flourish of hair seen in earlier images has been conventionalised into a formal supernatural auspicious mark (laksana). A large unadorned halo frames the Buddha’s head. This is an image of great majesty and quiet authority, a quintessential icon of the Buddha as the master of yoga. 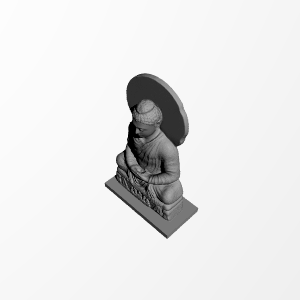