One of Tsar Nicholas II’s closest advisors, Vladimir Nikolayevich Orlov head the Tsar’s military cabinet between 1906 and 1915. He bore the nickname “Fat Orlov”, and was married to Olga, daughter of Prince Constantine Belozersky.

As head of the military cabinet, Orlov was keenly interested in new technologies, particularly in the motorcar, and its potential military applications. It may be that he introduced the Tsar to the motorcar in 1903. He was a patron of engineers, such as Adolphe Kergresse, who invented the Kegreese track.

Orlov was banished by the Tsar in 1915 due to losing the struggle for power to Rasputin.

Following the Russian revolution of 1917 and being exciled from his homeland, he was buried in Paris, France.

Fedot Shubin, the sculptor of this piece, is widely regarded as the greatest of all 18th century Russia. He was born a peasant in a village near Kholmogory and, inspired by his neighbor Mikhail Lomonosov, walked all the way to St Petersburg when he was 18, more than 1000km away. He was talented in walrus ivory carving, and joined the Imperial Academy of Arts, where his instructor found him to have such impressive abilities that he was awarded a gold medal, opening his opportunities to work and study abroad.

He later studied and worked in Paris and Rome, and returned to Russia later in 1772. He became fashionable and a sought-after sculptor, creating numerous pieces for the Marble Palace. 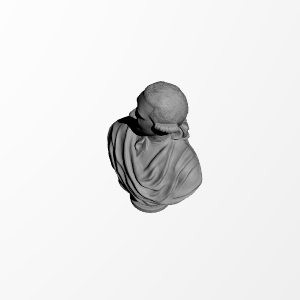