“In 1946 when the Japanese community began to return to Watsonville from the internment camps of World War II, not only was it a time to begin to reconstruct their lives, but also, for those who were bonsai enthusiasts, it was a time to rekindle their practice in the ancient art of bonsai..... New bonsai trees were started from the planting of seed, or from cuttings, or from grafted material taken from all types of plants, such as fruit trees, maple trees, pines, junipers, etc. Flowering plants like azaleas and camellias were very popular for bonsai, as well.... The cement pots were used [from the period after internment] up to the time the Watsonville Bonsai Club was formed in 1968. By that time the financial situation of the Japanese community began to improve immensely and the traditional, but still expensive, bonsai pots were now able to be obtained.” -Don White, 2015 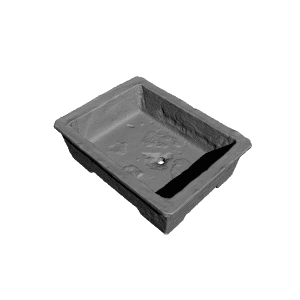 ×
4 collections where you can find Cement Bonsai Pot 通过 santacruzmah