This is a simple 3D model of the Charles Heath memorial in the grounds of St Mary's Priory Church in Monmouth, South Wales. Charles Health was an early local history and travel writer whose works included guides to Monmouth and the surrounding areas.

The inscription on the plaque on one side reads 'To the memory of Charles Heath bookseller, historian, antiquarian, author of A History of Monmouth and other descriptive works by which were first brought into the notice of tourists the antiquities, scenery and numerous objects of attraction in the neighbourhood of Monmouth. This monument was erected by his grateful and admiring fellow-townsmen and neighbours. He died January 7th A.D. 1831 aged 70'.

From https://en.wikipedia.org/wiki/Charles_Heath_(Monmouth) 'Heath died on New Year's Day in 1831 aged 69 although some report his death as 30 December 1830. A monument was not placed on his grave until 25 years later, but that memorial outside St Mary's Priory Church is now a listed building.'

A scan was done of one side of the monument using the excellent Sony 3DCreator app on an Xperia XZ2 smartphone, and tidied up using Meshmixer. The scan was then imported into Blender where the full model was constructed by duplicating the scan into each of the four sides, as they are identical except in that one side has the metal plaque inserted. 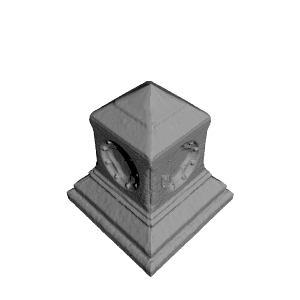