In the centre of the magnificent Sala delle vedute (Room of views) by painter Giuseppe Borsato – a successful venetian interpreter of Fontaine’s Napoleonic ‘Empire Style’  - is the marble group of Daedalus and Icarus, one of Antonio Canova’s earliest masterpieces.

The work was commissioned by the procurator Pietro Vettor Pisari for his Palazzo overlooking the Grand Canal.

This skilled composition links the two figures around an empty void, enclosed circularly by the threat that goes from Daedalus’ wing and hand. Expressing a form of emotion and dramatic communication, with his face contracted by doubt, the father Daedalus is attaching the wings made of feathers held together by wax to the arms of his young son Icarus who is humouring him in all tranquillity, looking forward to the joy of the flight that will allow him to flee the labyrinth and the threat of the Minotaur.

The treatment of the marble surface is vibrant and still a long way away from the polished purity that was to become a characteristic of Canova. An eloquent trademark of the sculptor, the mallet and chisel lying at the feel of the elderly architect are placed in ideal continuity with the artifice Daedalus. Presented at the Fiera della Sensa (Ascension) in 1777 where it met with resounding success. Young Canova earned 100 gold zecchins for his work, which he used to travel to Rome. It was there that his experience of the Ancient and the support of a variety of different people were to result in the decisive turn to the classical and his rise to international renown. 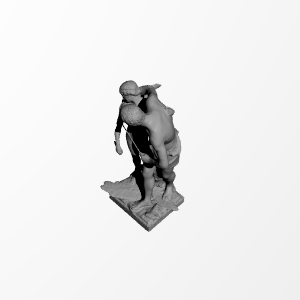