Marc Arcis’ remarkable Prophets, sculpted for the Chapelle of Notre-Dame du Mont-Carmel, on the request of the magistrate Vandages de Malapeire, were designed at the end of the 17th century. The church was sold off as an asset of the Nation in 1791. It was dismantled then was demolished in 1806.
Mount Carmel in the north of Israel is a holy site for Christians. The prophet Elijah vanquished the idols there and it is there that the first church consecrated to Mary was built.
Aside from paintings, four terracotta figures reached the museum from the vast decorative programme: the prophets Elijah, Elisha, Agabus (in the Old Testament, the prophets announce the coming of the Messiah) and Saint Simon Stock (English saint from the 13th century, General of the Order of the Carmelites). Although he left no writings, Elijah is considered by the Carmelites to be the founder of their Order of which he wore the scapular (a sort of apron made of two pieces of cloth). Elisha, to whom Elijah gave his coat, is his successor. Agabus, one of the rejected suitors of the Virgin, retired to Mount Carmel where he had the first chapel in the honour of Mary built. Here, he presents the plan of the chapel. Saint Simon Stock asked the Virgin to give her protection to the Order of the Carmelites. She gave him the Carmelite habit which allows the Carmelite monks to escape the flames of hell.
Each figure has been given a strongly expressed individuality and occupies space comfortably. Originally placed two by two on the steps leading to the statue of The Virgin and Child beneath a baldachin on twisted columns, they are one of the most eloquent examples of the vivacity of Toulousan Baroque art. 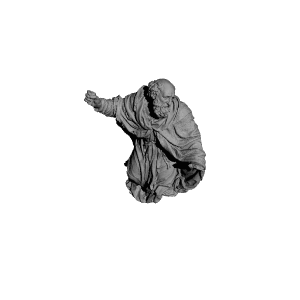 ×
0 collections where you can find Elijah, Prophet of the Carmelites 通过 Augustins