Cast commissioned by the French state for the Musée du Luxembourg in 1911, transferred to the Musée Rodin in 1918.

In his design for The Gates of Hell, dating from 1881, Rodin wanted to place Adam and Eve either side of The Gates as pendants. He later described how he had started to model a large female figure when he had had to stop because his sitter, who was pregnant, could no longer pose for him. He did not exhibit this unfinished statue of Eve until 1899, by which time he felt bold enough to show his works in a fragmentary or incomplete state.

The rough surface of the skin, the lack of detail and the trace of the metal armature still visible on the right foot all attest to the fact that this was a work in progress that Rodin had decided to retain.

In the meantime, he had completed a small version of Eve,which was exhibited in 1882 and greeted with enthusiasm. The sensuality of her body, now very smooth, in strong contrast with the modesty of the gesture she makes by lowering her head and crossing her arms, made it extremely popular. Large numbers of this statue were produced in bronze, marble and terracotta. 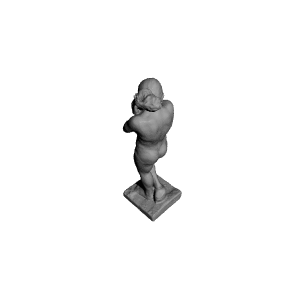 ×
4 collections where you can find Eve at The Musée Rodin, Paris 通过 Musée Rodin