This funerary tombstone with scenes of miracles of Christ dates back to 290 - 310 a.D. and belong from the Kircher Museum. Built in the second half of the seventeenth century by the Roman Senate secretary, Alfonso Donnino from Toscanella, which he bequeathed to the Roman College his collection of antiquities, the Museum Kircherian suffered over the years and the various ups and downs.

Enhanced by his father Athanasius Kircher, who linked his name to the Museum, and later by Buonanni and Contucci fathers, in 1773 the museum went through a period of decline following the suppression of the Jesuit Order, made in Rome by papa Clemente XIV, the some precious antiques and numismatic collections were transferred to the Vatican Museums.

A subsequent revival occurred under the pontificate of Pius VI (1775-1799) who restored the Jesuit Order in 1825, and Leo XII handed them the Roman College: since then the Museum Kircherian enjoyed additional increases, under the direction of educated father Giuseppe Marchi, who enriched the series until 1860, and his successor, father Francesco Tongiorgi.

From the collections of the Museum a considerable amount of numismatic material belonging to Medagliere Kircherian, formed since the time of Father Kircher, merged into the National Roman Museum: in particular note is the rich collection of castbronzes of ancient Italy, including whole series of ' aes grave, as well as a large part of the coins and other votive objects (including the famous glasses with itinerary) from thevotive deposit of Vicarello, on lake Bracciano (Rome).
展示更多 展示更少
允许
Technical Information
More Information
Object Parts
Tags
Christ tombstone stele funerary miracle
Remixes Add your Remix
展示更多
Interesting objects for you
展示更多 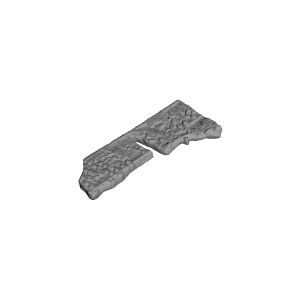