The gong is a type of ritual vessel used to serve wine. It was produced primarily during the reigns of King Wu and King Zhao in the late Shang (c. 1300–1046 BCE) and early Western Zhou (c. 1046–977 BCE,) dynasties. Found in Anyang, this deep boat-shaped pouring vessel displays almost perfect workmanship. Taotie (composite animal) masks are found on the handle and the lower registers of the sides. Three dragons decorate the surface of the vessel. The consecutive dragons in the neck belt are not identical. On the upper register to the right is a beaked dragon with a recumbent C-shaped horn. The dragon under the spout of the vessel has a heart-shaped horn. Its enormous beak parallels the curve in the rim. The lid is fashioned as a beast with bottle-shaped horns and fierce mouth. Its long, dragon-like body extends down the lid and loops at the end. All these features resemble those seen on a pair of gong excavated from the tomb of Fuhao, consort of King Wuding (r. c. 1250–1192 BCE), thus identifying Mia’s example to be one of the earliest known gongs. 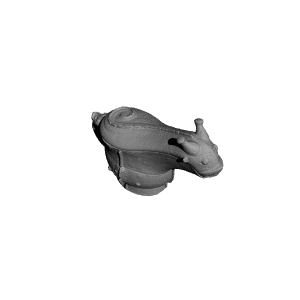 ×
2 collections where you can find Gong wine vessel 通过 artsMIA