One of the most appealing Hindu deities, Hanuman’s bravery, courage, and loyalty throughout the Ramayana epic are renowned. Here, he gestures obeisance to Rama with his raised left hand while engaging in animated discussion with his Lord. This sculpture was part of an ensemble with Rama, Sita, and Lakshmana at its center. It was included among an assemblage of processional icons kept by Vaishnava temples in South India for festival use. Typical of Chola-period representations, Hanuman has assumed anthropomorphic form, with only his face and tail confirming his monkey identity. Among the finest bronze images of Hanuman to have survived from the Chola kingdom of south India, this work embodies his noble, virtuous character with great sensitivity. 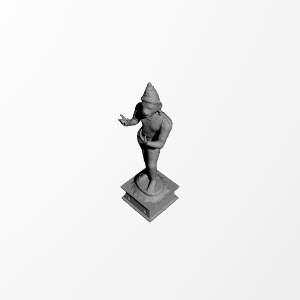