Fragment of a depiction of the Nativity made in Northern Italy (province of Piacenza).

Joseph, best known as the husband of Mary and earthly father of Jesus, is found in the New Testament books of Matthew and Luke. Joseph was a man of strong beliefs. He not only strived to do what was right but also to do it the right way. When his betrothed Mary came to him with the news of her pregnancy, he knew the child could not be his.

Joseph decided he would break the engagement but determined to do it in such a way that it would not bring shame to Mary. He wanted to be just, acting with fairness and love. He had great respect for Mary’s character but her story of being miraculously impregnated by God’s Holy Spirit was difficult to believe. During this time of consideration, he was visited by a messenger from God confirming Mary’s story and convincing Joseph that Mary had not been unfaithful. God instructed Joseph to marry the young woman and honor her virginity until the baby was born. Joseph obeyed the Lord.

This must have been initially very difficult for Joseph to reconcile in his natural mind. But Joseph had to be a very spiritual and faithful man of integrity. It is not known how long Joseph was in the life of Jesus but he realized from the moment of the heavenly visit that Jesus was to be very special.

Another part of this scene can be downloaded here. 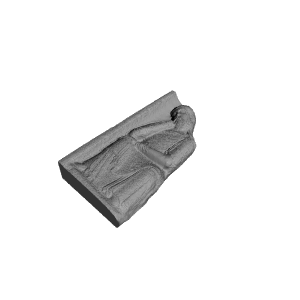