Now also known as the Utah State Governor’s Mansion, the Kearns Mansion was finished in 1902 for mining magnate Thomas Kearns from oolite marble. It was one of the first buildings of its time to mirror the wealth and success of East coast mining families like the Carnegies and Vanderbilts, incorporating early interior design technology such as electricity and one of the first showers in the state.

In the spring of 2014 the Division of Facilities and Construction Management rehabilitated the West-facing porch at the Kearns Mansion. The porch is constructed of oolite limestone, which weathered badly. Rehab work included replacing the damaged architectural details with new stone, carved to match the original. The damaged column capitals were removed and the column shafts were "crated" and lifted out by crane. After the original column bases were removed and replaced, and the original column shafts were reinstalled, new capitals were installed in lieu of the historic weathered capitals. This capital is the best surviving sample from the porch. It was offered by DFCM and Brad Westwood agreed to accept it into the collection. 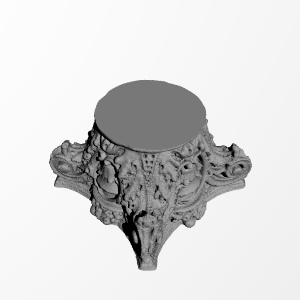 ×
2 collections where you can find Kearns Mansion Column 通过 meganweiss