This group statue is a proportion model in pink plaster to NMSk1113; this model is housed in the Orangery in the grounds of Ulriksdal Palace, the marble is in the Nationalmuseum.

The work depicts the union of Mars and Venus, a popular motif in philosophy and the arts. In the Greek myth, the adultery of Ares and Aphrodite had been exposed to ridicule when her husband Hephaestus (whose Roman equivalent was Vulcan) caught them in the act by means of magical snare. Scenes of Mars and Venus in Roman art often ignore the adulterous implications of their union; if anything, the relationship was romanticised. In funerary art, husbands and wives would have themselves portrayed as the passionate divine couple.

The uniting of deities representing Love and War lent itself to allegory. The Renaissance philosopher Marsilio Ficino notes that "only Venus dominates Mars, and he never dominates her". Neoclassical art says otherwise, much like in this sculpture, where Venus swoons under the embidoment of masculine aggression.

The marble version (NMSk 1113) can be downloaded here. 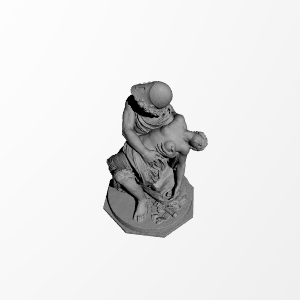