This style of Mermaid has had a long tradition in Shinto shrines in Japan, with reports of examples that are reputed to be over a thousand years old. Japanese seclusion in the late 18th and early 19th Centuries meant that these Mermaids were relatively unknown in the West, except perhaps to the Dutch, who had a special trading relationship with Japan. In the 1840s master showman, P. T. Barnum displayed a famous example called the 'Feejee Mermaid' in America and England. This led to Mermaids of this kind becoming increasingly collectible curiosities in the West, particularly after trade links to Japan were established in the later part of the 19th Century. The Horniman Merman came from the Wellcome Collection in 1982. The specimen had been purchased by (or on behalf of) Henry Wellcome on Tuesday 2nd September 1919 at an auction held by Stevens London auctioneers. In the catalogue from the auction, it was part of a batch of 65 lots described as "A Collection of Native Weapons, Carvings etc. Property of an Officer" and was listed as "Japan, Mermaid, paper-mache body, with fish-tail 20 in. long x 9 in. high". Between the auction and entry into the Horniman collections, the Merman gained the name 'Japanese monkey-fish', presumably because the head was considered to be that of a monkey - a common assumption made about this kind of specimen. A recent investigation of the teeth, X-rays and CT scans all suggest that the specimen is constructed mainly of papier-mâché and parts of fish. DNA testing is currently underway in an attempt to identify the fish species used. This may help confirm whether the specimen was indeed made in Japan.

This object is scanned by Horniman Museum 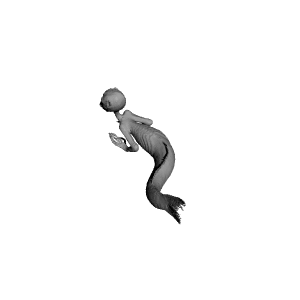 ×
1 collections where you can find Merman 通过 horniman