A woman with curled side locks, perhaps a princess, sits on a throne and rests her feet on a footstool. She wears a long robe with a decorated hem and holds a cup in her right hand. The statue was found above a funerary shaft containing the remains of a cremation and a several grave goods.

The statue was discovered intact at the site of Tell Halaf (anceint Guzana) in 1912. In 1943 it was damaged by a British bombing of Berlin that destroyed the Tell Halaf Museum. The statue is now extensively restored. The work is now on permanent display at the city's Pergamon Museum after over 27,000 pieces from the air raid were stuck back together.

Before the war this work, alongside 60 other fantastical figurines of people, scorpions, lions and birds, was part of the private collection of Max Freiherr von Oppenheim, a member of the banking dynasty. Working as a diplomat in Cairo, Oppenheim was also an archaeologist. Whilst the British were heavy on the colonialism, Oppenheim sought permission to excavate Tell Halaf, where he ended up restoring the works and ensured they were appropriately looked after.

After the works were painstakingly preserved, a few years later the British bombed the museum. Oppenheim made it his personal goal to restore the works, though died a couple of years into the work. Restoration works carried on after his death, and the collection has now been totally restored.

Scanned at the British Museum, part of the 'I Am Ashurbapinal' Exhibition (2019) 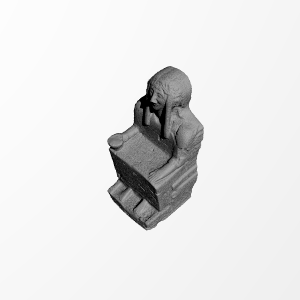