This is a statue of  Nandi lying down. In Hinduism, Nandi is the name of the gate-guardian deity of Kailasa, the abode of Lord Shiva. He is usually depicted as a bull, just as this sculpture, which also serves as the mount to the god Shiva.

This statue was originally located in Halebidu, Indian town which was the regal capital of the Hoysala Empire in the 12th century. 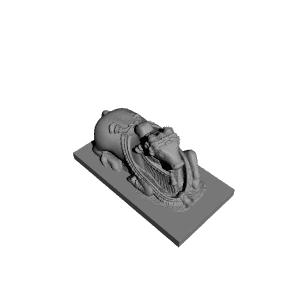