The sculptor Grupello, born in 1644 in Geraardsbergen of an Italian officer and a Flemish mother, and who made a brilliant career for himself in Germany, is unjustly little known in his own country. This is all the harder to explain given that the sculptures that he completed in Brussels before departing for Düsseldorf in 1695 are among his best works. After training at Artus Quellinus the Younger's studio in Antwerp and spending time in Paris and The Hague, Grupello settled in Brussels, where the Thurn and Taxis family ordered two marble statues of Diana and Narcissus from him for their residency garden. The park of the sumptuous patrician house, on the site of the current Petit Sablon, was considerably extended when Lamoral II Claudius Francis Count of Thurn and Taxis, a renowned art connoisseur with faultless taste, succeeded in buying a plot of land from the cloister of the Friars Minor. That Grupello obtained this commission from the Postmaster-General or his son should not surprise us; his superior talent was already widely known.

Diana, the goddess of nature and hunting, the twin sister of Apollo, is depicted with a greyhound. She is dressed in a flowing mantle with a quiver on her back. Narcissus refers also to Greek mythology. The beautiful young man was so overcome by his own image reflected by a fountain that he fell into ecstasy. In despair at being unable to seize this alter ego he languished and died. Grupello represents the moment of this sublime admiration. The young man carries a quiver on his back. His right foot rests on a dolphin, symbol of water. His left hand portrays his self love whilst the tenseness in his right hand expresses the sense of horror that overwhelms him when he realises that he is anchored to the spot.

The Diana can possibly be dated to around 1680-85, based on the likeness with a Diana statue in Versailles that was produced in 1679 by Coysevox. The more dynamic Narcissus can be compared with Charles Le Brun's preparatory designs for Versailles. The French influence on both statues is indisputable, but Grupello successfully and originally combined French classical elements with naturalistic Flemish baroque. In 1780 the two statues were transferred to the newly laid out Brussels city park, and subsequently entrusted to the museum. 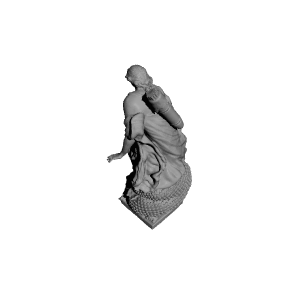 ×
2 collections where you can find Narcissus at the Royal Museum of Fine Arts in Brussels, Belgium 通过 Scan The World