The seventh century witnesses the birth of narrative art in Greek art. Artists in a variety of media begin to tell stories in their art. As exemplified by the examples above, one of the most popular stories told by these artists is the story of the Greek hero Perseus, with the aid of the goddess Athena, beheading the monstrous female figure of Medusa. Significantly scholars have seen the name Medusa etymologically going back to the Sanscrit name Medha or in Greek Metis or in Egyptian Maat, meaning"sovereign female wisdom." Versions of the story talk about how Medusa was born a beautiful maiden with beautiful flowing hair. She was punished by the goddess Athena for rivalling her beauty and Medusa was transformed into a hideous figure with snakes instead of flowing locks for her hair.

The seventh century is known by scholars as the Orientalizing period. This is a period of dramatic change in Greek art as Greek culture expands out and comes under the influence of non-Greek, especially Near Eastern cultures. With this encounter with non-Greek cultures, the Greeks developed a strong sense of cultural identity. While the Greeks were divided politically into fiercely independent city-states, there was still a strong sense of intense Greek identity through the shared language and culture. As Greeks came into contact with other cultures, they emphasized the difference between themselves and others. It is in Greek culture that the concept of the "barbarian" was invented. "Barbarian" ultimately is a Greek word. It was used by the Greek to identify a non-Greek speaker, one who speaks nonsense or "bar bar". Greek art during the seventh century witnesses a fascination with the monstrous. New monsters like the sphinx and griffin become popular. Medusa and her sisters the Gorgons exemplify this fascination. As evidenced by the examples illustrated above, the Orientalizing artist did not have a canonical form for the visual form of Medusa. The relief vase represents her as a centaur, a popular monstrous figure in early Greek art, while the Eleusis amphora represents the Gorgons with heads that look like cauldrons. It is only at the end of the seventh century as illustrated by the Nessos amphora that artists settle on a canonical form. 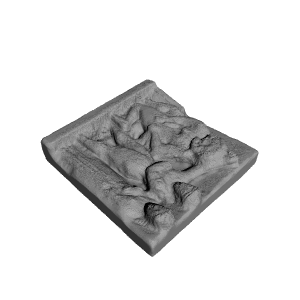