Khafre Enthroned is a funerary statue of the Pharaoh Khafre, who reigned during the Fourth dynasty of ancient Egypt (c. 2570 BC). It is now located in the Egyptian Museum in Cairo. The construction is made of anorthosite gneiss, (related to diorite) a valuable, extremely hard, and dark stone brought 400 miles down the Nile River from royal quarries. This highlights Khafre’s importance and power as a ruler. The statue was carved for the Pharaoh’s valley temple near the Great Sphinx, a part of the necropolis (a funerary city) used in funeral rituals. This Old Kingdom statue has an important function in Egyptian tombs as substitute abodes for the Pharaoh’s ka—the life force that accompanied a person with a kind of other self. After death, the ka leaves the body into the afterlife, but still needs a place to rest: the statue.

This sculpture, depicted in-the-round (versus relief sculpture) shows Khafre seated, one of the basic formulaic types used during the Old Kingdom to show the human figure. Mummification played a huge role in the Egyptian culture, a 70-day process to ensure immortality for the pharaoh. Starting in the 3rd millennium BCE, if the pharaoh’s mummy was damaged, a ka statue was created to "ensure immortality and permanence of the deceased’s identity by providing a substitute dwelling place for the ka" 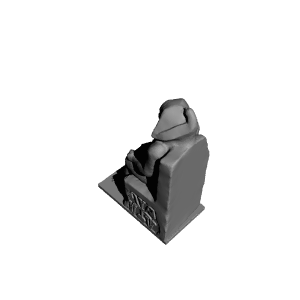