Also known as the Herculaneum Pallas, this work originates from the Tablinium of the Villa of the Papyri, Herculaneum. Believed to have been made in 49-25 BC.

This is an example of the Roman fashion for “archaising”, making sculptures in imitation of the early Greek Archaic style. Archaising sculpture is characterised by the use of an amalgam of stylistic versions of the Archaic period, such as the long parallel folds of the clothing (but with anachronistic sleeves), and the neo-Classical face. But the features are so eclectic and stylised that they could never be believed to be of real Archaic date.

Pallas is the Roman equivalent of Athena, and the striding pose brandishing a spear aloft (promachos) was a popular subject on painted pots from earlier centuries. A huge Athena Promachos stood on the Athenian Acropolis. 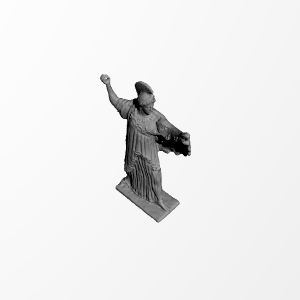