This model commemorates Makha Bucha, a Buddhist Holiday and festival.

Also known as Magha Puja, on the full moon of the third lunar month, seven months after Buddha began his teachings, 1,250 monks gathered to hear Buddha preach. Buddha ordained these monks and spread the principles of buddhism. 45 years later, on the same full moon in the third lunar month, Buddha again delivered his teachings shortly before his death.

This model is based on the famous Reclining Buddha in the Wat Pho temple complex in Bangkok, Thailand, a colossal statue covered in gold leaf, housed inside a building (vihara). It represents Buddha in the posture he took shortly before passing.

At MiniWorld we celebrate buddhist culture and the people of Thailand, Myanmar, Laos, Cambodia, and many more!

All my things I model myself by hand and brain, please give credit. It's all about spreading culture! MiniWorld is the collection of 3D printable landmarks of the world!

Please note that this model is the representation of a religious figure for millions of people, be respectful when printing, remixing, and sharing. Similar to other deity representations such as those by Scan the World, this model is based off the original sculpture.

Printer : XYZ Printing DaVinci Jr.
Rafts : No
Supports : Yes
Resolution : 0.1
Infill : 5%
Notes : Support is not absolutely necessary but if you want good quality use it. 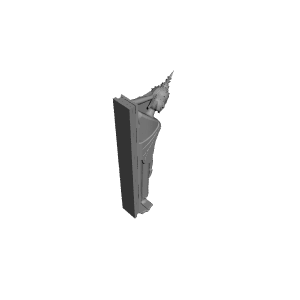 Before and after golden paint!