The Ludovisi Ares is an Antonine Roman marble sculpture of Mars, a fine 2nd-century copy of a late 4th-century BCE Greek original, associated with Scopas or Lysippus: thus the Roman god of war receives his Greek name, Ares.

Ares/Mars is portrayed as young and beardless and seated on a trophy of arms, while an Eros plays about his feet, drawing attention to the fact that the god of war, in a moment of repose, is presented as a love object. The 18th-century connoisseur Johann Joachim Winckelmann, a man with a practiced eye for male beauty, found the Ludovisi Ares the most beautiful Mars that had been preserved from Antiquity, when he wrote the catalogue of the Ludovisi collection.

Lysippos was a Greek sculptor of the 4th century BC. Together with Scopas and Praxiteles, he is considered one of the three greatest sculptors of the Classical Greek era, bringing transition into the Hellenistic period. Problems confront the study of Lysippos because of the difficulty of identifying his style among the copies which survive. Not only did he have a large workshop and a large number of disciples in his immediate circle, but there is understood to have been a market for replicas of his work, supplied from outside his circle, both in his lifetime and later in the Hellenistic and Roman periods. 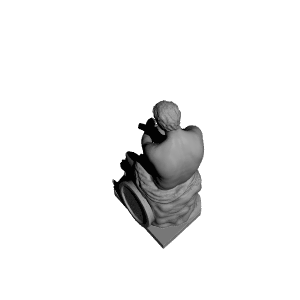