This is my first "mechanical" entry into the Sinterit SLS design competition, as well as my first uploaded design!

I haven't printed it yet, and I don't have any experience with actual printing, as I don't have a printer until December or later. So, I designed it with as much adherence to the Lisa system as I could.

The actual final size should be 61 mm all sides, so a bit bigger than a regulation Rubik's cube. The corner pieces also have a bit less clearance on the inside than a traditional Rubix cube, but that shouldn't be a problem if it's being printed with the joints already together. No assembly means a very rigid and sturdy Rubik's cube. It won't allow for speedsolving, but it should work as a toy that a kid will have a hard time breaking.

The smallest clearance is on the center pivot points with a .1 mm separation. All other interacting parts have a separation of .5mm, and I was questioning myself on if that was too much.

I had a lot of fun making it, it only ended up taking an hour or two to design the structure, and it turned out a lot better than I expected! The reason for the spelling of the name is mostly as a joke, and also because that is actually how I searched for it for the reference. 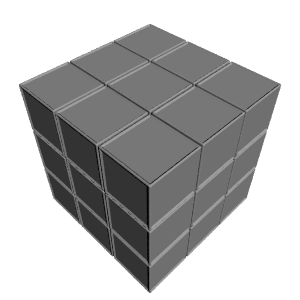 ×
0 collections where you can find Rubix Cube 通过 Cork_Top