Lucius Annaeus Seneca (often known as Seneca the Younger or simply Seneca 4 BC – AD 65) was a Roman Stoic philosopher, statesman, dramatist, and in one work humorist, of the Silver Age of Latin literature. He was born in Cordoba in Hispania, and raised in Rome, where he was trained in rhetoric and philosophy.

Miriam Griffin says in her biography of Seneca that "the evidence for Seneca's life before his exile in 41 is so slight, and the potential interest of these years, for social history as well as for biography, is so great that few writers on Seneca have resisted the temptation to eke out knowledge with imagination." Griffin also infers from the ancient sources that Seneca was born in either 8, 4, or 1 BC. She thinks he was born between 4 and 1 BC and was a resident in Rome by AD 5. Seneca says that he was carried to Rome in the arms of his mother's stepsister. Griffin says that, allowing for rhetorical exaggeration, means "it is fair to conclude that Seneca was in Rome as a very small boy." Be that as it may, it is clear that he was in Rome at a relatively early stage in his life.

From AD 54 to 62, Seneca acted as Nero's advisor, together with the praetorian prefect Sextus Afranius Burrus. One byproduct of his influence was that Seneca was appointed suffect consul in 56. Seneca's influence was said to have been especially strong in the first year. Tacitus and Dio suggest that Nero's early rule, during which time he listened to Seneca and Burrus, was quite competent. However, the ancient sources suggest, over time, Seneca and Burrus lost their influence over the emperor. In 59 they had reluctantly agreed to Agrippina's murder, and afterward, Tacitus reports that Seneca wrote a dishonest exculpation of Nero to the Senate.

"Nor was this the only instance in which his conduct was seen to be diametrically opposed to the teachings of his philosophy. For while denouncing tyranny, he was making himself the teacher of a tyrant; while inveighing against the associates of the powerful, he did not hold aloof from the palace itself; and though he had nothing good to say of flatterers, he himself had constantly fawned upon Messalina and the freedmen of Claudius, to such an extent, in fact, as actually to send them from the island of his exile a book containing their praises—a book that he afterwards suppressed out of shame. Though finding fault with the rich, he himself acquired a fortune of 300,000,000 sesterces; and though he censured the extravagances of others, he had five hundred tables of citrus wood with legs of ivory, all identically alike, and he served banquets on them."

Dio also reports that Seneca had been involved in forcing large loans on the indigenous British aristocracy in the aftermath of Claudius's Roman conquest of Britain, and then calling them in suddenly and aggressively, which he includes as one of the factors that contributed to Boudica's rebellion. This may have contributed as well to his own downfall.

Following Burrus' death in 62, Seneca became the subject of criticism by what Tacitus describes as Nero's "more disreputable advisers." Charges included allegations of excessive wealth, the grandeur of his property, and calculated bids for popularity. Seneca requested an audience with Nero in which he sought permission to retire from public duties, pleading age and infirmity. The two then parted on apparently warm terms. Seneca subsequently adopted a quiet lifestyle on his country estates, concentrating on his studies and seldom visiting Rome.

In AD 65, Seneca was caught up in the aftermath of the Pisonian conspiracy, a plot to kill Nero. Although it is unlikely that Seneca conspired, Nero ordered him to kill himself. Seneca followed tradition by severing several veins in order to bleed to death, and his wife Pompeia Paulina attempted to share his fate. A generation after the Julio-Claudian emperors, Tacitus wrote an account of the suicide, which in view of his Republican sympathies is perhaps somewhat romanticized. According to this account, Nero ordered Seneca's wife to be saved. Her wounds were bound up and she made no further attempt to kill herself. As for Seneca himself, his age and diet were blamed for slow loss of blood and extended pain rather than a quick death; he also took poison, which was also not fatal. After dictating his last words to a scribe, and with a circle of friends attending him in his home, he immersed himself in a warm bath, which was expected to speed blood flow and ease his pain. Tacitus wrote, "He was then carried into a bath, with the steam of which he was suffocated, and he was burnt without any of the usual funeral rites. So he had directed in a codicil of his will, even when in the height of his wealth and power he was thinking of life’s close."
展示更多 展示更少
允许
Technical Information
More Information
Object Parts
Tags
bust man
Remixes Add your Remix
展示更多
Interesting objects for you
展示更多 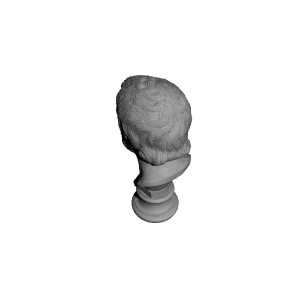 ×
2 collections where you can find Seneca 通过 Scan The World