This sculpture shows Saint Barbara, an early Christian Greek saint and martyr. She is often portrayed with miniature chains and a tower, like here. As one of the Fourteen Holy Helpers, Barbara continues to be a popular saint in modern times, perhaps best known as the patron saint of armourers, artillerymen, military engineers, miners and others who work with explosives because of her old legend's association with lightning, and also of mathematicians. 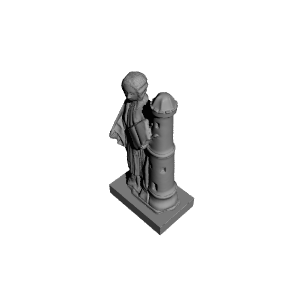 ×
0 collections where you can find St. Barbara 通过 Scan The World