By the figure's pose and style of dress this sculpture can be easily identified as the Greek God of Medicine. Asclepius sacrified his life to save people and was struck by Zeus's thunderbolt for starting to raise the dead. He was much venerated in Greece. The centre of his cult was the city of Epidaurus with its famous sanctuary. A bronze cult sculpture (which this sculpture was probably influenced by) made in Athens in the third quarter of the 5th Century BC was probably the work of pupils of the sculptor Myron. 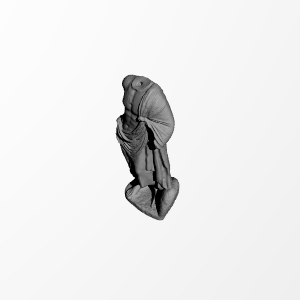