STILTZ was designed for his ability to stretch or shrink the length of his arms and legs whenever he wanted. This ability could allow him to be the tallest or the smallest person in his group. He could even make himself an average height to help blend in and not draw attention to himself. He can stretch or shrink any arm or leg independently for any purpose. He can reach really far to grab something or reach up high to block a field goal. He would be very athletic because of this abilty.

He also has a glass shield that he can pop up over his head if needed as seen in a couple of the attached images.

The intention for him was to be a hero of sorts. STILTZ is the kind of guy who likes to help others when the chance arises and he is not fond of bullies.

STILTZ is also a standalone character who could easily entertain children as part of a TV show where he has landed on earth and interacts with children.

Several other characters were also designed to complete an "Outer Space" based children's show concept.

I am submitting my STILTZ character for 3D Printing aspart of this contest!

The 3D Printed sample in the images was printed on a Form 2 - SLA 3D Printer using grey resin at 70% of scale.

The STILTZ  Character and all “Alien” characters submitted as part of this contest entry are 100% owned by;

Thank you for the opportunity to participate in your contest to design a children's character for WildBrain! 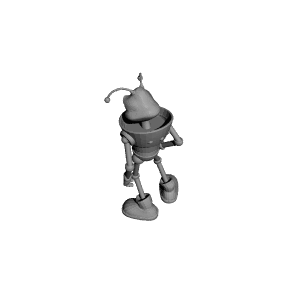