The Alunda elk is a ceremonial stone axe from the Neolithic, c. 4000-1700 B.C., that was found during the excavation of a ditch in Norrlövsta in Alunda parish, Östhammar Municipality, Uppland in 1910.

The 21 cm long object of greenish black diorite is not a proper axe, it hasn’t been used in battle or for utilitarian purposes. One end is naturalistically sculpted in the shape of an elk head, the ridge along the body alludes to the animal's neck, and the back edge is softly rounded. The conical shaft hole is not bored through.

The Alunda elk was probably used in ceremonies, the nature and meaning of which have been lost to us. It is considered one of the most beautiful animal sculptures of the Nordic Neolithic, made by a highly skilled craftsperson who was very familiar with the physical characteristics of the elk species.

The axe is believed to originate from Karelia where similar animal depictions are known.

This object was scanned by Historiska, The Swedish History Museum 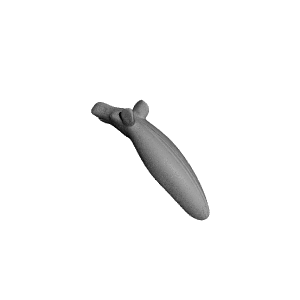 ×
0 collections where you can find The Alunda Elk 通过 Historiska