The excavation of these images of ideal female beauty triggered nearly three centuries of archaeological exploration at Herculaneum and nearby Pompeii. Archaeologists uncovered a theater, temples, a forum, and the suburban Villa dei Papiri.

The Herculaneum Women are Roman versions of sculptural types deriving from Greek art. They have idealized facial features, wear elegant, enveloping drapery, and share the same distinctive hairstyle, the so-called melon coiffure, which became fashionable in Greece after 350 B.C., when the models for the Herculaneum Women were created.

The Herculaneum Women are the most prevalent images of the draped female form in the classical world. Their elegant, enveloping drapery and composed stance represented feminine virtues of beauty, grace, and decorum in both Greek and Roman societies. More than 180 examples of the large statue type and over 160 of the small statue type are known, along with dozens of variants and reliefs on tombstones and sarcophagi.

The majority of the figures are combined with individualized portraits. This sculpture holds a portrait head said to be that of Antonia.

Early 2nd Century AD copy of a Greek original of the 4th Century BC. 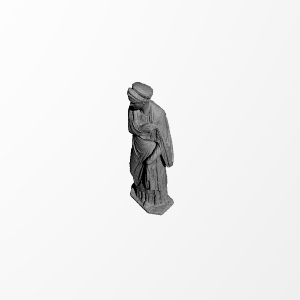