The Three Shades at The Musée Rodin, Paris

The Three Shades at The Musée Rodin, Paris

In Dante’s Divine Comedy, the shades, i.e. the souls of the damned, stand at the entrance to Hell, pointing to an unequivocal inscription, “Abandon hope, all ye who enter here”. Rodin made several studies of Shades, before finally deciding to assemble three identical figures that seem to be turning around the same point. He placed them on top of The Gates, from where they could gaze down at the spectator, then had them enlarged to create a monumental independent group in 1904.

As in Adam , whose twisting, tormented pose The Three Shades have borrowed, Michelangelo’s influence is obvious here. The angle at which the heads fall downward is so exaggerated that the necks and shoulders form an almost horizontal line. It was through anatomical distortion like this that Rodin achieved an expressive force quite unparalleled in his time.

"By assembling three casts of her, Rodin's wins for himself the painter's advantage. The margins become engaged intervalls, so that the repeat of this one irregular body yields infinite rhythmic amplifications."

In her essay 'Rodin's Gates of Hell: Sculptural illustration of Dante's Divine Comedy' Aida Audeh, however, points to Canto XVI as the literary source of 'The Shades' and their threefold appearance on top of 'The Gates'. In this part of the poem, Dante meets the souls of three Florentine men condemned for the act of sodomy. The punished figures are exposed to a rain of fire and in incessant motion while trying to avoid the scorching heat.

In 1887 Cosmo Monkhouse interpreted 'The Three Shades' as a personification of the first three lines of the inscription over the door of Dante's Hell:

"The Gate of Despair ... The lintel is surmonted by a group of three nude, emaciated, and miserable figures, the plastic translation of the first three lines of the well-known inscription over the door of Dante's hell:

... By what sad harmony of unlovely lines the artist has quelled our natural aversion to such a sight, by what subtle touches he has transformed these ghastly images into a voice which stays our feet, possibly M. Rodin himself could scarcely tell but it is something more than a tour de force, for it shows the operation of the born artistic faculty which cannot conceive except in accordance with the great laws of fitness and harmony. The idea is not a pleasant one, but is conveyed with power, and the group is 'ideal' in the plainest sense of the word." 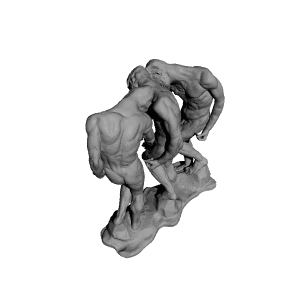