This axe was found in Hallberg parish, Närke. Thin-butted axes are primarily connected to the Funnel Beaker Culture and dates from the early Neolithic to the Middle Neolithic A, c:a 3700-3200BC. The thin-butted axes were working axes used to cut trees or other wooden elements. These axes are commonly found in megalithic tombs or in depositions.

This object was polished on all sides leaving only but a few traces of the previous knapping. This axe also show signs of being used. A large flake of flint has chipped off at the edge of the bit, probably during use. Another large flake has broken off from the other side of the bit, but most probably this happened when the axe was still in the ground, through ploughing or similar events.

This object was scanned by Historiska, The Swedish History Museum 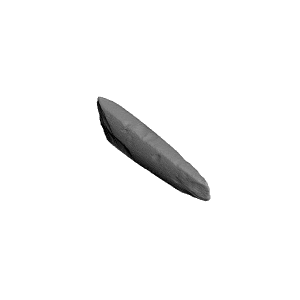 ×
0 collections where you can find Thin-butted axe 通过 Historiska