Professor Albus Percival Wulfric Brian Dumbledore is a fictional character in J. K. Rowling's Harry Potter series. For most of the series, he is the headmaster of the wizarding school Hogwarts. As part of his backstory, it is revealed that he is the founder and leader of the Order of the Phoenix, an organisation dedicated to fighting Lord Voldemort. 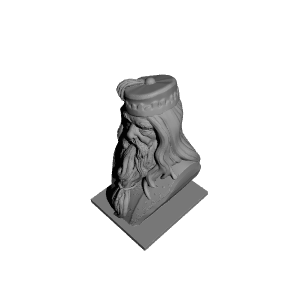 Printed at a 20% infill @ 0.1 mm layer height with no support. Great Model! Printed several. They make great gifts for people who are potterheads such as myself.

Printed around 200% larger with 10% infill, 0.1 layer height and no supports . Base was removed after printing to fit on surface where it is to be displayed. Needed to be patched after printing. Thinking this was due to the scale increase and should print perfect at the base scale. Light sanding followed by primer and passes of a Stainless Steel and metallic gold spray paint. Details were painted with a dry brush pass with a brass rub n buff and finished with a black acrylic wash.

This was an awesome print. I used a Copper Metal filament to print this amazing Dumbledore. Your design was fantastic. Please make more Harry Potter characters haha.

Awesome design! Printed at 200% scale (took about 24 hours to complete). Here's a video of the printing process: http://youtu.be/0AXZDMDRedg

Silver ran out through the print :(

We printed these on the Library's PolyPrinter 229.

My second ever print using my Creality Ender 3 and it came out amazing. I got Ziro marble PLA specifically for this bust and I'm very glad I did. Its a great model and was very easy to print using Cura's stock profile (for the CR10 but with a smaller bed since I had the Ender 3) Thanks so much for uploading this!

My second print ever. I'd say it came out really good. Thanks for the model, my daughter loves it.

Great design! I printed him a few months ago in grey PLA and finally decided to paint him recently. Turned out pretty cool.

Printed at 0.12mm in Gizmo Dorks marble PLA. It's a great likeness and it printed quite well. I made use of Cura's tree supports which made for good support of the nose and a couple other parts, without leaving anything to clean up.