3D
13,624 views 671 downloads
2 collections
Community Prints Add your picture
Be the first to share a picture of this printed object
0 comments

Here a 3D printable Cobra B.A.T. chest from the 80's G.I. Joe show. This design was made with Tinkercad. The Battle Android Trooper (B.A.T.) is a fictional robot from the G.I. Joe: A Real American Hero universe. BATs are the perfect Cobra trooper. They never question orders, shirk duty or surrender. They are cheap and easy to replace. However, BATs do not react well to changes in field conditions, or discriminate well between targets. They will shoot at anything that moves. Cobra Infantrymen don't like to be on the same battlefield with B.A.Ts, and will sometimes dispense BATs into a losing battle, by kicking them out of low-flying aircraft without parachutes. B.A.Ts also have a tendency to burst into flame when hit from behind 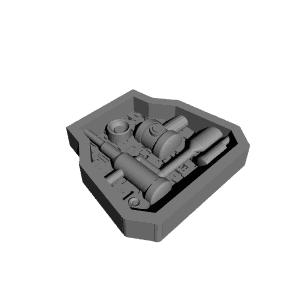