3D
360°
Featured Scan The World
2,857 views 170 downloads
2 collections
Community Prints Add your picture
Be the first to share a picture of this printed object
1 comments

This limestone column, carved in medium relief, depicts an ornately dressed individual and a dwarf. The central figure is most likely a Maya ruler, and he wears an enormous tiered headdress with feathers splaying to the tops and sides of the column. He also wears a collar with three images of human heads, and a long beaded necklace. In his right hand, he carries a hooked blade, and his left arm is hidden behind a shield with a central knotted element. Most of his body is covered by a long apron made of square mosaic elements, and he wears high-backed sandals on his feet. On the right side of the monument stands a dwarf who wears a columnar headdress and large earflare assemblages, or ornaments worn in the earlobe (see 1994.35.591a, b for an example of an earflare set, and 1979.206.1047 for individuals wearing earflare assemblages).

Carved columns are not common in ancient Maya art, but they do appear in the Puuc region of the Yucatan Peninsula in the eighth and ninth centuries AD. Another column in the Worcester Art Museum in Massachusetts—also depicting a standing ruler with dwarves—is thought to be the pair to this column; together, the two columns probably flanked a doorway. The doorway was most likely topped by a carved lintel, which depicted two seated individuals on either side of a deity face from which water lilies emerge. The unfinished and irregular rear portion of the column suggests it may have been embedded in a wall rather than freestanding. In its original setting, this column would have been visible to people outside and entering the building, which was probably a long, low range building common in the Puuc region. The column would originally have been brightly colored, and the remains of red pigment are still visible on the ruler’s face.

The costume and accessories of the ruler refer to themes of warfare, sacrifice, and agricultural fertility. The ruler wears an enormous headdress that represents a monstrous zoomorphic head. Two central rosettes are stacked above the ruler’s head. From the upper rosette, a trapezoidal element emerges; this is the monster’s nose, and on either side of it are its eyes, with curlicue pupils. Two curved fangs are located between the upper and lower rosettes. Although there is no lower jaw on this headdress, similar headdresses on other monuments do include a lower jaw, and ancient viewers of this monument would have understood the ruler’s head as emerging from the mouth of the monster. The square plaques of the mosaic apron were probably meant to represent jade. Jade plaques also appear on the top part of the headdress between the upper and lower rosette.

That this headdress was still associated with warfare, however, is indicated by the objects the ruler carries in his hands. The obsidian blade in the ruler’s right hand is shown as a hooked implement. Similar objects are carried by rulers on other monuments from this part of the Maya world, including the column in the Worcester Art Museum (see 1978.412.195 for an elaborate figural obsidian blade). The blade carries multiple meanings. It may refer to the rain god, Chahk, who uses an axe to break the clouds and make rain. Ensuring the continuation and fertility of agricultural cycles was one of the central duties of Maya rulers; wielding an axe, then, refers to this important role. The obsidian weapon may also be a sacrificial blade. On similar columns from the Puuc region, including columns from Sayil Structure 4B and an unprovenanced column in the Ethnologisches Museum in Berlin, rulers carry sacrificial blades with globular objects at the tip that may represent human hearts. These blades emphasize military sacrifice as one of the important duties of Maya kings. In the ruler’s left hand—presumably, since we cannot see the hand itself—is a shield. The central design in the shield is made up of crossed bands that may relate to the woven mat symbol, associated with authority and the right to rule.

Other elements of this ruler’s costume point to an interest in lineage. The ruler’s collar features one frontal head, facing toward the viewer, with three dangling celts (see Celt 1994.35.356). An additional head, in profile, adorns each shoulder (the head on the left is less visible due to damage to the monument). Maya rulers often wore the names or visages of their ancestors in their costumes, physically linking themselves to their royal predecessors and emphasizing their own dynastic legitimacy. These heads would most likely have been made of jade and strung together with jade beads and plaques to create the thick collar we see on the monument today. Below the collar, a long beaded necklace ends in a central bar pendant. Water lilies emerge from either side of the central bar and from the bottom, echoing the water lilies on the lintel that once accompanied this column.

On the right side of the column, the dwarf is framed by feathers from the ruler’s headdress. Dwarves appear in a variety of contexts in Maya art, but they are represented most prominently as courtly attendants. On Maya ceramics, dwarves hold mirrors so that rulers can see themselves in their finery (see Mirror-Bearer 1979.206.1063 for a sculptural version of this motif), while jade plaques depict dwarves seated next to rulers. Dwarves are particularly common in monumental art from the Puuc area, where they appear frequently on columns and jambs in architectural settings. On this monument, the bent arm of the dwarf may represent a gesture associated with dance.

The dwarf, the costume of the ruler, and the obsidian blade suggest that this scene depicts a ritual dance performance. Other sculptures from the Puuc area, such as Xcalumkin Jamb 4, Xcocha Columns 2 and 3, and the columns from Sayil Structure 4B1, depict richly dressed, dancing individuals holding shields and obsidian blades. Each of the two columns from Sayil also depicts a dwarf standing next to the dancing ruler, and the column in the Worcester Art Museum features two dancing dwarves. Dance was an important ritual action in ancient Maya life, and was particularly important to Maya kings, who used the movement of their body to express royal authority, communicate with supernatural powers, and symbolize community and cultural ideals. The architectural setting of this column in a doorway, moreover, suggests that dancers may have moved in and out of this building, and that the building itself may have served as a setting for ritual dances related to agricultural fertility, warfare, and sacrifice.

While the composition of this monument is largely symmetrical, a closer look reveals subtle differences that indicate at least two different artists worked on this sculpture. For example, the rectangular flanges on either side of the ruler’s face display different sculptural approaches. On the left of the face, the fret motif is orderly and restrained, and the curved lines of the feathers emerging from the flange are incised with delicate lines. On the right side, the sturdy fret motif and the lack of incised lines on the feathers indicate a sculptor interested in conveying solidity and weight. The outer line of the eyes on the headdress, too, curves downward on the right, but not on the left. The column at the Worcester Art Museum also displays this asymmetry, suggesting that the irregularities in this column reflect regular artistic practice.

Finally, the damaged faces on this monument hint at the power of carved stone in the ancient Maya world. The eyes, nose and mouth of the ruler have been intentionally damaged, as has part of the face of the dwarf. For the Maya, carved stone monuments were not static representations of the people they depicted. Instead, such sculptures shared the identity and essence of their subjects. A column with an image of a ruler, in other words, would have been understood as an extension of that ruler and that ruler’s holiness, or ch’ulel. As such, sculptures were powerful agentive beings, and that power required careful maintenance and negotiation. Chipping off the faces on stone monuments would have offered one way of terminating that power. Ancient defacers paid particular attention to the nose, which was a conduit for holy breath; destroying the nose may have been considered an effective ritual closure (see also Maya Monument L.1970.78, where the profile of the ruler Yo’nal Ahk was also defaced in antiquity). Despite the damaged faces, this monument clearly conveys the power of the ruler as a warrior, sacrificer, and dancer, ensuring the continuation of life cycles through ritual action and the presentation of military strength.

Houston, Stephen D., and David Stuart. "The Ancient Maya Self: Personhood and Portraiture in the Classic Period." RES: Anthropology and Aesthetics 33(1998):73–101.

Pollock, H.E.D. The Puuc: An Architectural Survey of the Hill Country of Yucatan and Northern Campeche, Mexico. Memoirs of the Peabody Museum, Vol. 19. Cambridge, MA: Peabody Museum of Archaeology and Ethnology, Harvard University, 1980. 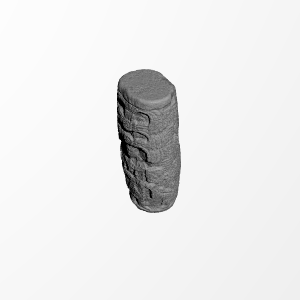 ×
2 collections where you can find Column, Costumed Figure von MacaulayHonorsCollege