3D
360°
Scan The World
1,656 views 103 downloads
Community Prints Add your picture
Be the first to share a picture of this printed object
0 comments

This figure belongs to a widespread Central African tradition of maintaining power figures that derive their authority from the insertion and application of spiritually charged substances. The identity of these substances is secret to the ritual specialist who applies them and varies significantly. Some of the many documented substances include certain river clay, some herbs, ashes of burnt trees from a battleground and the flesh of someone who has committed suicide.

Large Songye power figures like this example belonged to the entire community, while small power figures were owned by individuals. This figure would have been brought out to a community gathering to deal with occasional communal concerns such as crop failure, widespread illness, or a territorial dispute with a neighbouring village. The figure with its spiritual charge was considered a protective entity. 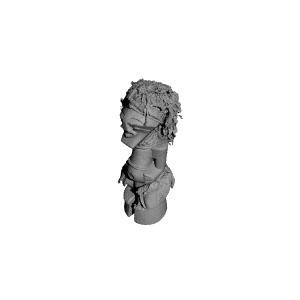 ×
0 collections where you can find Community power figure von imamuseum