3D
Scan The World
2,466 views 152 downloads
Community Prints Add your picture
Be the first to share a picture of this printed object
0 comments

Daedalus was a highly respected and talented Athenian artisan descendent from the royal family of Cecrops, the mythical first king of Athens. He was known for his skill as an architect, sculpture, and inventor, and he produced many famous works. Despite his self-confidence, Daedalus once committed a crime of envy against Talus, his nephew and apprentice. Talus, who seemed destined to become as great an artisan as his uncle Daedalus, was inspired one day to invent the saw after having seen the way a snake used its jaws. Daedalus, momentarily stricken with jealousy, threw Talus off of the Acropolis. For this crime, Daedalus was exiled to Crete and placed in the service of King Minos, where he eventually had a son, Icarus, with the beautiful Naucrate, a mistress-slave of the King.

Daedalus conceived to escape from the Labyrinth with Icarus from Crete by constructing wings and then flying to safety. He built the wings from feathers and wax, and before the two set off he warned Icarus not to fly too low lest his wings touch the waves and get wet, and not too high lest the sun melt the wax. But the young Icarus, overwhelmed by the thrill of flying, did not heed his father's warning, and flew too close to the sun whereupon the wax in his wings melted and he fell into the sea. Daedalus escaped to Sicily and Icarus' body was carried ashore by the current to an island then without a name.

This relief depicts Daedalus on the left making his sons wings. 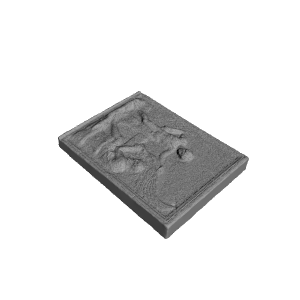