3D
360°
Featured Scan The World
3,059 views 327 downloads
1 collection
Community Prints Add your picture
Be the first to share a picture of this printed object
0 comments

The Day is a marble sculpture (160×150 cm, maximum length in oblique 285 cm) by Michelangelo Buonarroti, datable to 1526–1531 and part of the decoration of the New Sacristy in San Lorenzo in Florence. In particular, it is one of the four allegories of the parts of the day, and is located on the right on the sarcophagus of the tomb of Giuliano de' Medici Duke of Nemours.

The Day was probably begun in 1526, when Lorenzo's tomb was finished and Giuliano's tomb started. The statue had to be completed after the resumption of work following the forced pause of the siege of Florence and its consequences, being left to a state of conspicuous “unfinished” at the artist's departure for Rome in 1534.

The Day is represented as a male personification, half-lying and naked, like the other statues in the series. It was perhaps modeled on the river divinities of the Arch of Septimius Severus, the Belvedere Torso, of which the powerful anatomical structure in tension was resumed. He also resumed the pose of the Child in the youthful Madonna della Scala and that of one of the bronze nudes in the vault of the Sistine Chapel.

It is the only one, among the series of allegories, to turn its back to the viewer, in a pose in contrast to that of the nearby Notte (Night). The left elbow is bent in support, while the right arm stretches backwards to look for something: only the forearm is actually sculpted, while the hand is lost in the non-sculpted part. The legs are crossed in opposite sense to the rotation of the bust and this twisting is also highlighted by the rotation of the head towards the spectator. The bearded, barely sketched face shows only a mysterious, highly evocative and emblematic expression precisely because of its incompleteness.

The work has received numerous interpretations: a political symbol of rebellion from slavery, or an autobiographical theme of the drive towards freedom; symbol of Christian light or personification of life; allegory of fire or choleric temperament; personification of action, pain, anger, contempt or revenge.

(Machine translated from the Italian entry on Wikipedia). 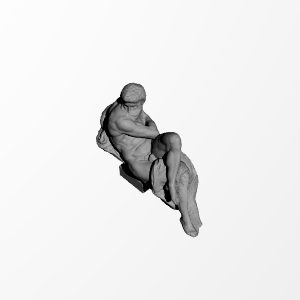 ×
1 collections where you can find Day by Michelangelo von jerry7171