3D
Scan The World
6,987 views 930 downloads
6 collections
Community Prints Add your picture
Be the first to share a picture of this printed object
0 comments

Together with the parks and Vogelzang Middelheimmuseum makes the park Den Brandt part of the Nachtegalenpark. The park Den Brandt in Antwerp is 21 hectares and forms the western part of the Nachtegalenpark. Den Brandt used in 1396 for the first time as a name for a piece of land. Presumably indicating the name on a burnt spot, a former mining method in which pieces of heath and forest were burned and then were transformed into agricultural land. In the history of the domain, there is a farm, later a play huys', and finally around 1582 by a court, viz. In Brande Court. The present castle was the family della Faille the Waerloos Founded in Louis XVI style in 1790, the period when the previous building was demolished. In 1820 a series was carried out in-depth changes. The owner showed include digging the ponds. In 1910 the Kreglinger family became owner of the castle with 16 acres park.
Part of the park was sold to the city of Antwerp. For the opening of the park on 07.05.1911 left the city places a reproduction of the statue of Michelangelo's "David" (purchased at the World Exhibition in Brussels in 1910). This is a copy of the Italian artist Michelangelo. For decency David was given a fig leaf (or is it an oak leaves), while Michelangelo no bones looked in complete nudity. This image also graced the 1910 World Exhibition in Brussels, but the Italian pavilion.

The family Kreglinger bought another picture of the World, viz. "Dancing nymphs", a popular location for wedding pictures. The entrance to the Beukenlaan leads to a fountain, which represents "three dancing women". There is sometimes talked about the "Three Graces".
"The group consists of three slender, cheerful girls with trendy hairstyles and contemporary on the body modulated dresses with wide circular fanning wide hem below the knees. With bent body trying, balancing on the edge, to hold hands without the water to fall. " (Antoon Van Ruyssevelt, City images Antwerp annoo 2011, p. 187)

The statue is by the sculptor Walter Schott (° Ilsenburg / Resin 1861 - Berlin 1938), and would come from the World Fair of 1910 in Brussels, where it adorned the German pavilion. On the brink Walter Schott fec (it) and Aktien Gesellschaft Gladbeck / friedrichshagen. Fecit means manufactured.
In 1962, the city officially became owner of the entire castle grounds. In 1995 the castle was in the annexes listed. The gardens are beautifully landscaped French garden of the castle, and English with canals and ponds back. For many people of Antwerp Park Den Brandt is a unique place for walking or jogging. Organized every year in the park Jazz Middelheim. The "gingerbread house", a small English cottage, the park provides a romantic touch.

A similar statue stands in Central Park in New York. It bears the name Untermeyer Fountain Samuel Untermeyer that let there draw in 1947.

Walter Schott (18. September 1861, Ilsenburg; † 2 September 1938, Berlin) was a German professor and sculptor. He was the son "gräflich-stolbergischen Hütteninspektors" Eduard Schott. He studied at the Academy of Hanover from 1880 to 1883 at the Berlin Academy. From 1885 he established himself as a sculptor in Berlin and designed many memorials on behalf of the neubarocken Bildhauer Berliner Schule zahlreiche Denkmäler. He was totally afhankelkijk of Kezer Wilhem II and enjoyed little support in the Weimar Republic. He died in Berlin and his urn was in the tomb of his father buried in Ilsenburg. 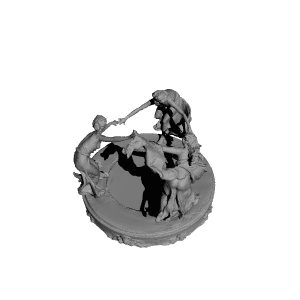 ×
6 collections where you can find Nymphenbrunnen von Scan The World