3D
Scan The World
1,612 views 100 downloads
Community Prints Add your picture
Be the first to share a picture of this printed object
0 comments

The Doryphoros (Greek Δορυφόρος Classical Greek Greek pronunciation: [dorypʰóros], "Spear-Bearer"; Latinised as Doryphorus) of Polykleitos is one of the best known Greek sculptures of classical antiquity, depicting a solidly-built, well-muscled standing warrior, originally bearing a spear balanced on his left shoulder. Rendered somewhat above life-size proportions, the lost bronze original of the work would have been cast circa 440 BCE, but it is today known only from later (mainly Roman period) marble copies. The work nonetheless forms an important early example of both Classical Greek contrapposto and classical realism; as such, the iconic Doryphoros proved highly influential elsewhere in ancient art. 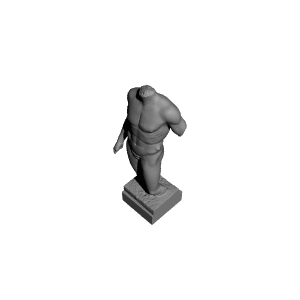 ×
0 collections where you can find Doryphoros von Scan The World