Eros (a fragment of the statue)

3D
Scan The World
3,477 views 303 downloads
Community Prints Add your picture
Be the first to share a picture of this printed object
0 comments

Eros (a fragment of the statue)

-- A Fragment of the past

While most Greek monumental sculpture consists of bronzes, Praxiteles preferred to work in marble.

Eros appears in ancient Greek sources under several different guises. In the earliest sources (the cosmogonies, the earliest philosophers, and texts referring to the mystery religions), he is one of the primordial gods involved in the coming into being of the cosmos. But in later sources, Eros is represented as the son of Aphrodite, whose mischievous interventions in the affairs of gods and mortals cause bonds of love to form, often illicitly. Ultimately, in the later satirical poets, he is represented as a blindfolded child, the precursor to the chubby Renaissance Cupid, whereas in early Greek poetry and art, Eros was depicted as an adult male who embodies sexual power, and a profound artist.

A cult of Eros existed in pre-classical Greece, but it was much less important than that of Aphrodite. However, in late antiquity, Eros was worshiped by a fertility cult in Thespiae. In Athens, he shared a very popular cult with Aphrodite, and the fourth day of every month was sacred to him.

The God supports his left arm on a tree stump and carries in the arm flexion the child. In the lost right he holds a wine-grape or a toy for the boy. The body forms a completely new ideal of male beauty. The body forms are softer and more delicate, the transitions are less sharp, firm, but without athletic power. The surface acts like a living flesh, just as the garment seems genuine to the glimpse.

Praxiteles (/prækˈsɪtᵻliːz/; Greek: Πραξιτέλης, etymology: he who finishes his works) of Athens, the son of Cephisodotus the Elder, was the most renowned of the Attic sculptors of the 4th century BC. He was the first to sculpt the nude female form in a life-size statue. While no indubitably attributable sculpture by Praxiteles is extant, numerous copies of his works have survived; several authors, including Pliny the Elder, wrote of his works; and coins engraved with silhouettes of his various famous statuary types from the period still exist.

Some writers have maintained that there were two sculptors of the name Praxiteles. One was a contemporary of Pheidias, and the other his more celebrated grandson. Though the repetition of the same name in every other generation is common in Greece, there is no certain evidence for either position. 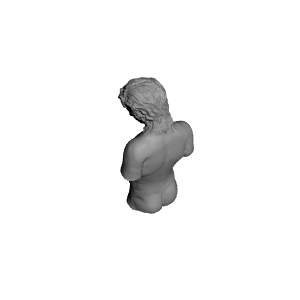