3D
360°
Scan The World
1,130 views 71 downloads
Community Prints Add your picture
Be the first to share a picture of this printed object
0 comments

Certain grave markers replicated ceremonial metal and pottery vessels in marble. Although missing its three handles, this example copies the loutrophoros, a type of vase used to hold water for a bride to bathe in her wedding. Due to this association with nupital rites, these marble versions commemorated girls who died before marriage. This one most likely stood over a female grave.

Flamboyant displays were forbidden by law and there were restraints on lavish expenditure at funerals. 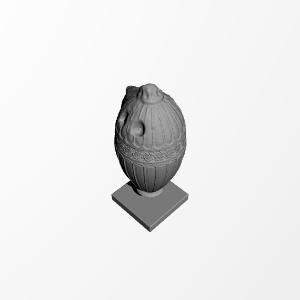