3D
Scan The World
3,961 views 627 downloads
6 collections
Community Prints Add your picture
Be the first to share a picture of this printed object
0 comments

The pharaoh Nectanebo II often invoked a very close connection–even a merging–between himself and the falcon god of kingship, Horus. In fact, Nectanebo II was the focus of a cult in which he was referred to as "Nectanebo-the-Falcon," which could indeed be what is represented by this striking conjunction of a powerful falcon and the monarch. This idea seems to be supported by the fact that Horus is not named on the base, only Nectanebo and the god Osiris-Mnevis, at whose sanctuary in Heliopolis the statue may have been erected.
The composition may be read as a rebus of Nectanebo's Egyptian name, Nakhthorheb: nakht, the sword held in the king's left hand; Hor, the falcon; and heb, the festival sign in the king's right hand. The last sign probably refers to the city of Hebyt, which was the site of the great temple constructed by Nectanebo II for Isis, mother of Horus. 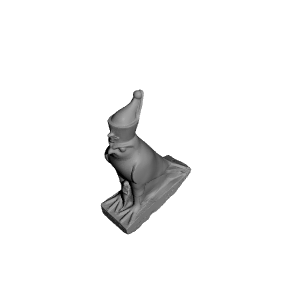