3D
Scan The World
2,439 views 95 downloads
1 collection
Community Prints Add your picture
Be the first to share a picture of this printed object
0 comments

Georgy Tovstonogov was born in Tbilisi, Russian Empire (now Georgia), or in St. Petersburg on September 28, 1915, to a Russian noble and a Georgian classical singer Tamara Papitashvili.

In 1938 he graduated from the State Institute of Theatrical Art in Moscow. From 1938 to 1946, he worked as a director in the Tbilisi Griboedov Theater, from 1946 to 1949 in the Central Children's Theater in Moscow, from 1950 to 1956 in the Leningrad Leninsky Komsomol Theater, and from 1956 until his death in 1989 in the Bolshoi Academic Gorky Theater. He was a professor at the Leningrad Institute for Theatre, Music and Cinema since 1960. In 1957 he became a People's Artist of the USSR. He won the Stalin Prize thrice (1950, 1952, 1956), and got two Orders of Lenin and many other Soviet awards. In 1972, he produced the book The Profession of the Stage-Director, which is the best example of his directing style, and in which he shares his honest opinions on Lee Strasberg and Konstantin Stanislavsky. On May 23, 1989 Tovtonogov died of heart attack in his car returning home after general rehearsal of his new production The Visit by Friedrich Dürrenmatt.

Difficult print, much support material needed. Be careful with removing, the cross can break off easily! 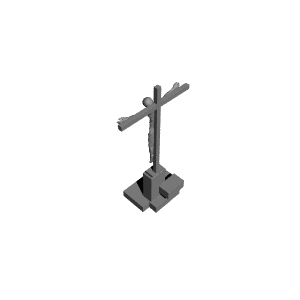