3D
Scan The World
1,688 views 91 downloads
Community Prints Add your picture
Be the first to share a picture of this printed object
0 comments

Roman copy of the cult statue made by sculptor Alcamenes, that was erected in the Ares Temple on the Athenian agora.

Alcamenes (Ancient Greek: Ἀλκαμένης) was an ancient Greek sculptor of Lemnos and Athens, who flourished in the 2nd half of the 5th century BC. He was a younger contemporary of Phidias and noted for the delicacy and finish of his works, among which a Hephaestus and an Aphrodite "of the Gardens" were conspicuous.

Ares is the god of war, one of the Twelve olympian gods and the son of Zeus and Hera. In literature Ares represents the violent and physical untamed aspect of war, which is in contrast to Athena who represents military strategy and generalship as the goddess of intelligence. Although Ares embodied the physical aggression necessary for success in war, the Greeks were ambivalent toward him because he was a dangerous, overwhelming force that was insatiable in battle.

Ares was never very popular—either with men or the other immortals. As a result, his worship in Greece was not substantial or widespread. The cult and representation of Ares are very rare in the ancient Greek world, especially in sculpture. 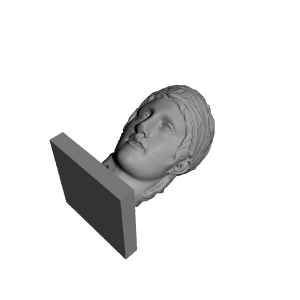