The marble group of Hercules and the Centaur Nessus, was completed in 1599 by Flemish sculptor Giambologna, born Jean Boulogne (1529-1608). The sculpture was carved, impressively, from a single block of marble by Giambologna and it sits in the open-air gallery Loggia dei Lanzi on the Piazza della Signoria in Florence, among the square's other famous marble occupants.
Showing an advanced understanding of anatomy - visible in Hercules' rib cage, showing through his taut skin and the veined legs of the centaur, poised in battle - Giambologna's statue is a powerful evocation of the strength of mortal man.

Greatly influenced by Michelangelo, but an expert in his own Mannerist style, Giambologna's stone carvings exhibit a focus on beauty rather than emotion. Under the influence of Georgio Vasari, Giambologna became one of the Medici's most important court sculptors. Fearing he could be enticed into full-time employment by the Spanish or Austrian Habsburgs he was interred in a chapel of his own design in the Santissima Annuniziata - a Basilica in Florence.
In Greek mythology, it is the robe of Nessus, poisoned with the slain centaur's blood that kills Hercules after his wife gives it to him, burning Hercules and compelling him to throw himself on a funeral pyre. Metaphorically the 'Robe of Nessus' represents a source of inescapable misfortune and features in the works of Shakespeare, T.S. Eliot and Alexandre Dumas. 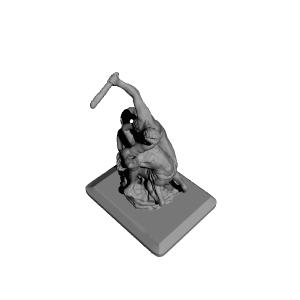 ×
6 collections where you can find Hercules and the Centaur von Scan The World
×
Jeff Tucker
@Darthtucker3d
2
Printed on: Afinia H-Series
Material: ABS
Posted at: 18th May 2021

Hercules comingled with other statues used for a Marvel Ghost Rider Ramp.